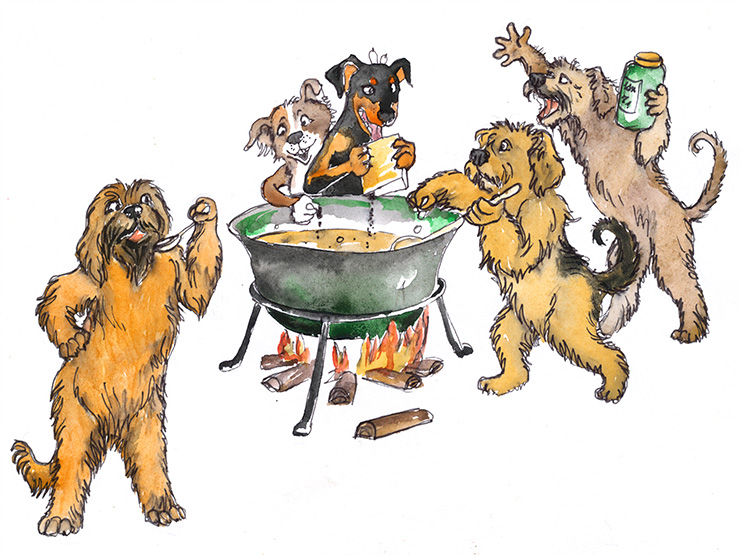 The origin of this excellent French breed is unfortunately unknown. According to some historical records it may be a cross between the Beauceron and other early herders from Spain. Others suggest that it originates from ancient guard dogs with the influence of the Barbet (a French water dog whose origin is also unknown). Nevertheless, one thing is for certain, the Briard was a working dog of the common people (shepherds and peasants) that became to existence by natural selection of the best dogs which were suitable for herding and guarding flocks of sheep. ☺

It was first recognized as an independent breed in the 19th century France as the Chien Berger de Brie, or the Shepherd dog of Brie. 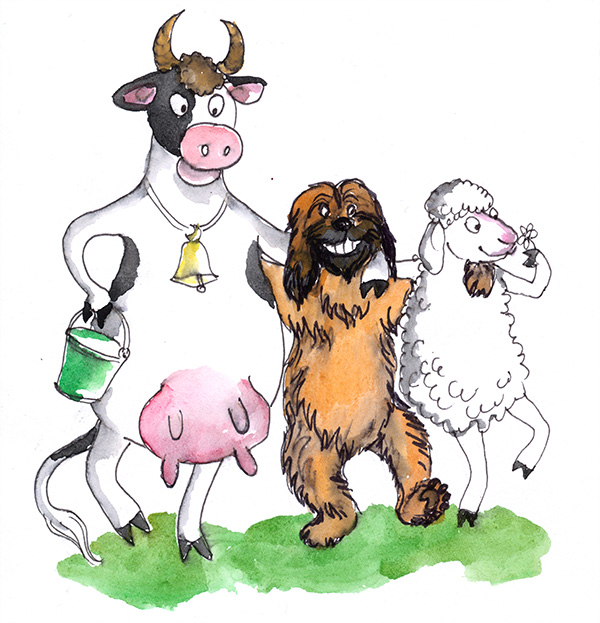 In the past, the Briard was used to guard and herd animals. It was an all-rounder who had to accomplish a handful of tasks. As the shepherd’s partner, the Briard was able to get all sorts of chores done relying on its intelligenent and independent spirit. Being a family dog, it always returned home for the night to guard its loved ones and their property. Briards could cope with all kinds of herding circumstances because of their ability to learn and carry out a lot of commands. 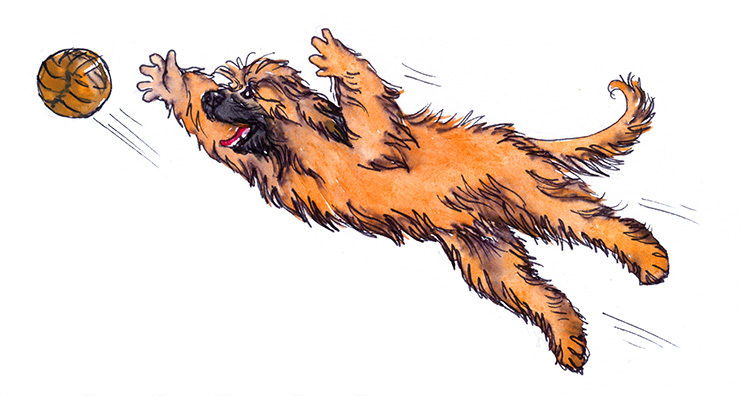 They are full of life and have a will to work, always happy to please their owner and never too tired to play. Briards are obedient and easily trainable, although in certain situations they can be aggressive, unyielding and eager to fight. On the other hand, they are gentle, extremely faithful and protective of their owner’s family members. They don‘t tolerate harsh treatment due to their hypersensitivity.

The Briard is an intelligent and thoughtful dog which is capable of efficient and systematic work after having undergone a thorough and adequate training. It can be suspicious of strangers and from time to time reluctant to socialize. But you can take only one look into its affectionate eyes and be lost for life. As with all breeds, some individuals can be shy and unsound with a belligerent nature which should be deemed unfit for breeding. 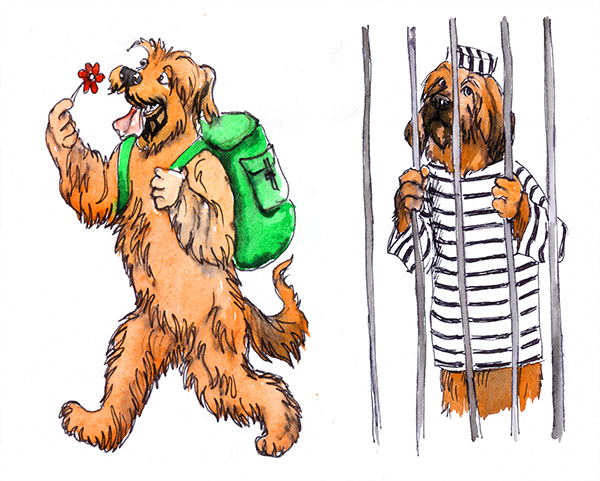 With the gradual decrease of its employability as a herder, the Briard is nowdays more often used as a watch-dog, or has taken on a variety of service and therapy roles. Nonetheless, it still needs a lot of exercise and therefore should not be kept in a confined place, but rather be frequently taken for walking tours and released from the lead as often as possible. It is advisable to take your Briard to training facilities in order to pass examinations and gather positive experiences by socializing with different people (adults and children alike), as well as dogs. Briards are eager to work and long for a close relationship with their owner/trainer. In addition, with the right amount of support and guidance they can achieve a lot of success and develop into a well-rounded individual. 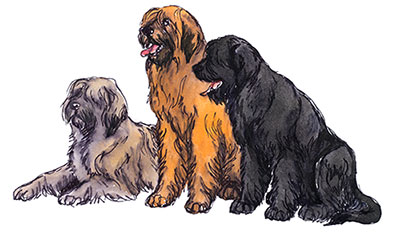 BEHAVIOUR/TEMPERAMENT: Balanced temperament, neither aggressive nor timid.
The Briard should be steady and fearless.

HEAD: Strong, long, covered with hair forming beard, moustache and eyebrows slightly veiling the eyes. Seen from the side, the lines of the skull and muzzle are parallel.

CRANIAL REGION:
Skull: Strong, very slightly rounded seen from the side.
Stop: Pronounced; at equal distance from the occiput and the tip of the nose.

FACIAL REGION:
Nose: Strong. The nostrils are well open. The nose is always black except in blue dogs which have either a blue or bluish nose.
Muzzle: The end of the muzzle is rather square. Muzzle strong, sufficiently broad and never pointed.
Nosebridge: Straight.
Lips: Lips are tight fitting
Jaws/Teeth: Strong jaws; white teeth. Scissors bite.
Eyes: Oval. Horizontal, well open, rather large and of dark colour. In blue dogs, paler coloured eyes are permitted.
Ears: Set on high, not plastered against the head and rather short if left natural. The length of the cartilage of the uncropped ear should be equal to or slightly less than half the length of the head. The ears are always flat and covered with long hair. If cropped, in countries where this practice is not forbidden, they should be carried erect, neither divergent nor convergent.

NECK: Muscled and springing well up from the shoulders

BODY:
Topline: The back is straight. The loin is short and firm.
Croup: Only slightly sloping, of slightly rounded shape.
Chest: Wide and long, well let down to the elbows: ribs well sprung.

TAIL: Natural, carried low, it reaches at least the hock joint, without deviation, forming a slight hook like a “J”. In action, the tail may be carried at the highest in prolongation of the topline.

FOREQUARTERS:
Shoulder: Oblique, well angulated, moderately long, fitting closely to the thoracic wall.
Elbow: In line with the body.
Forearm: Straight and muscled.
Metacarpus( Pastern): Slightly sloping, seen from the side.
Forefeet: Strong, round and well in axis with the body. The nails are always black (except in blues) and the pads hard. Toes should be well knit and arched.

HINDQUARTERS:
Upper thigh: Muscled.
Hock joint: Not too low down and well angulated.
Metatarsus (Rear pasterns): Perfectly vertical, seen from behind.
Hindfeet: Strong, round. The nails are always black (except in blues) and the pads hard. Toes should be well knit.
Dewclaws: By tradition, the shepherds want to keep the double dewclaws. The dewclaws form thumbs, well separated and with nails, relatively close to the foot.

GAIT/MOVEMENT: Regular, supple, harmonious, in a manner which allows the dog to cover ground and accomplish its work with a minimum of effort and fatigue. The Briard should have a long trot with good reach and good thrust from behind.

A coat of warm fawn colour may show a lighter colour on the points and on the inclined parts of the body (fawn marked with sandy colour). Black, grey and blue coats can likewise display zones of a lighter shade. All colours may show different degrees of greying.

FAULTS: Any departure from the foregoing points should be considered a fault and the seriousness with which the fault should be regarded should be in exact proportion to its degree and its effect upon the health and welfare of the dog. 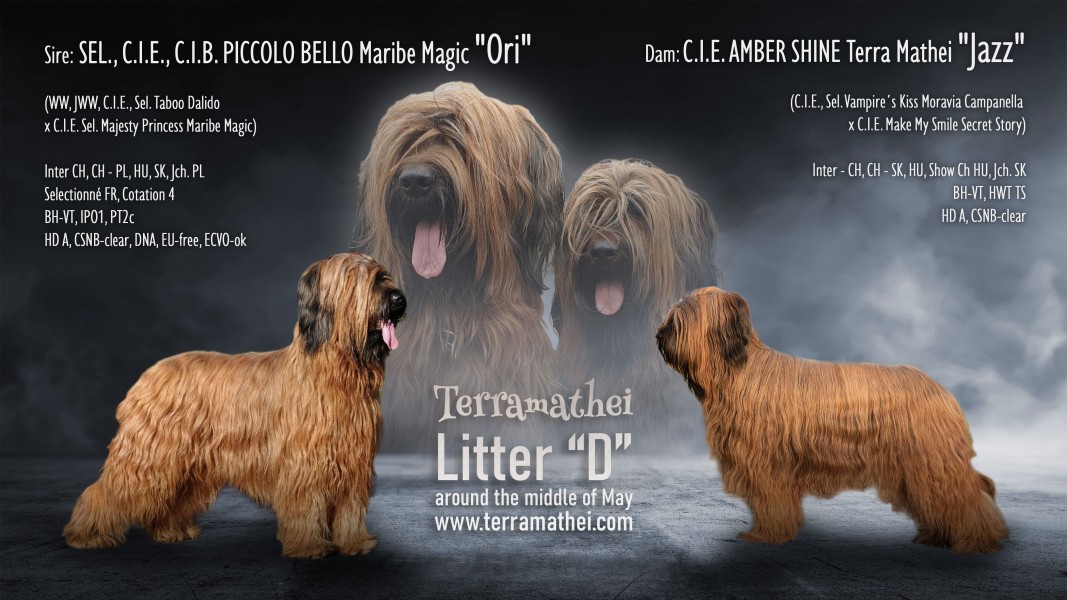 We are expecting Briard puppies around the middle of May 2022. 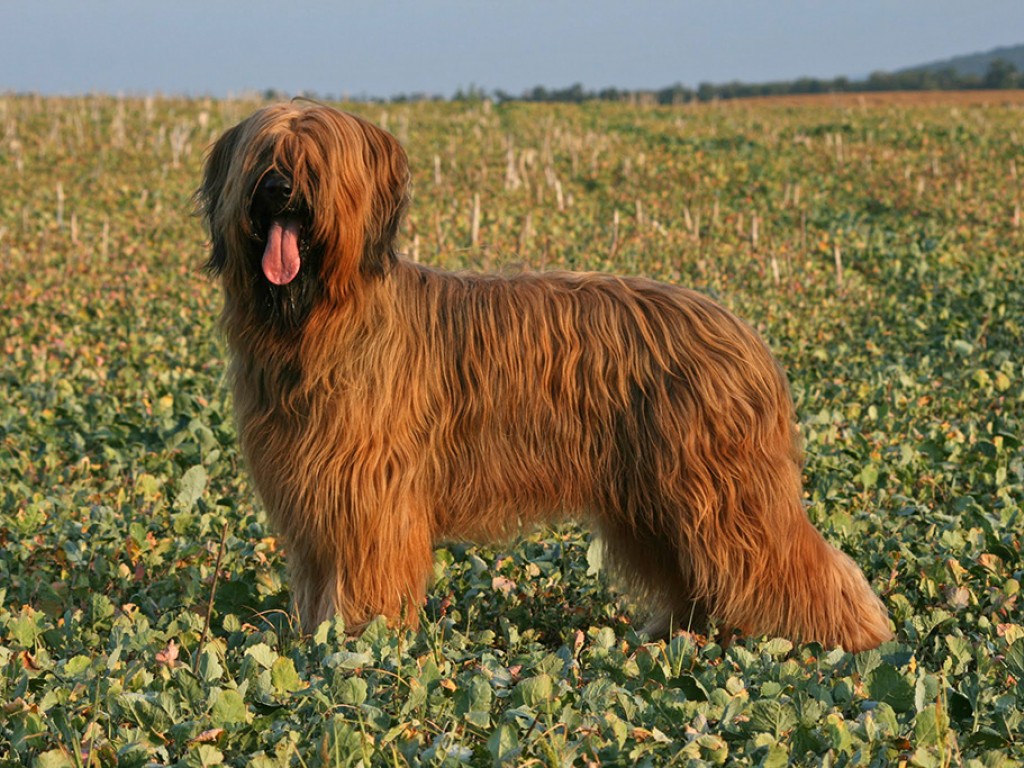 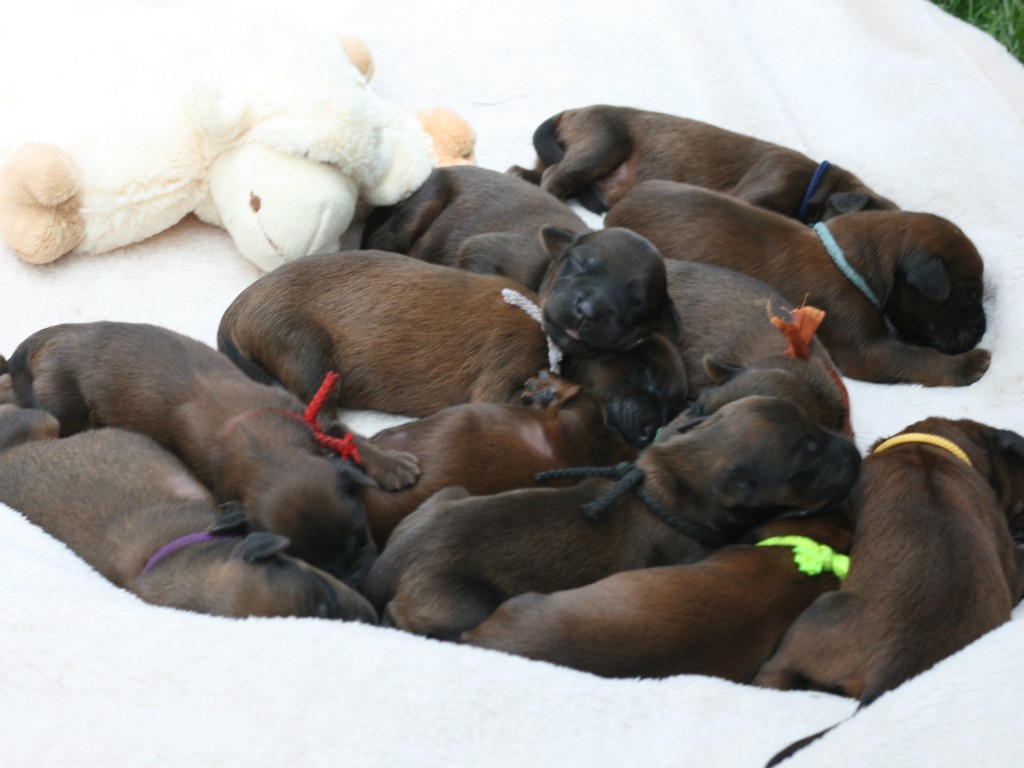 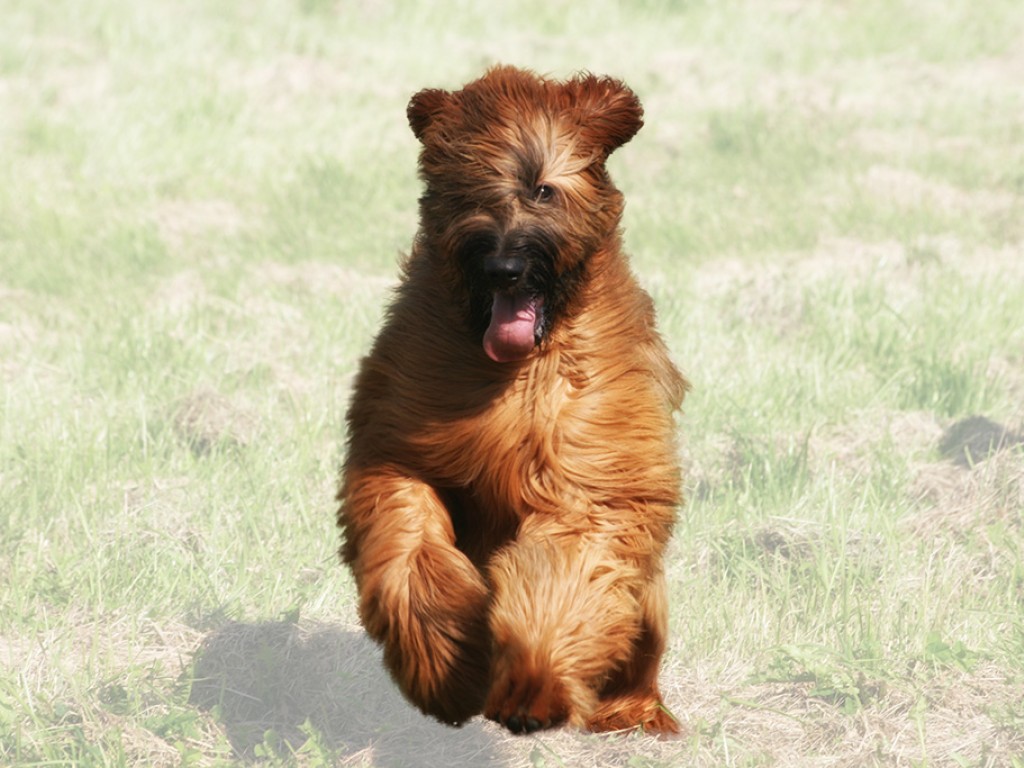 By using the Website, you agree that we can place cookies on your device, by which we improve our services.
More info OK